Different Styles of Temples in Pashupatinath 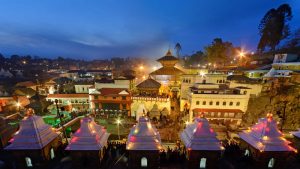 Although, the exact date of Pashupatinath’s construction is unknown, it is considered to be the oldest Hindu temple of Kathmandu. The existing temples in the Pashupatinath area are as old as 9th century. The earliest evidence of the temple’s existence dates back to 400 AD.

According to the inscriptions by 7th century King Jay Dev 2nd, Supusha Dev, who was 39 generations ahead of 5th century King Manadev, built Pashupatinath. The current main temple of Pashupatinath complex was built in the end of the 17th century to replace the previous one, destroyed by termites.

Countless smaller temples have been constructed around the main temple on both banks of Bagmati River during the last few centuries.

The chronology of dates and the structure of the temples around Pashupatinath are related. In different eras, the architectural styles have been different.

Pagoda Style: The main temple of Pashupatinath is made in Pagoda style. In the east it is called Mandapa Shaili, roof on top of roof. Nepali pagodas are the most important and significant features of Nepali architecture. In the travel diary of 7th century Chinese traveler Huang Tsang, it is found to be written that Nepal had Pagoda-style building during his visit as well.

During the Malla regime, Pagoda style temples were profoundly constructed. Before the Malla Regime, during the 9th century the temples were made by stone and wood alone. Today, only the artefacts of temples made during the Lichhavi period are left such as pillars.

Dome Style: Domed temples were influenced by Mughal architecture and are believed to be Rana imports. They were introduced during the Malla period. Domed temples were favored by the Shah and Rana rulers and were built around Kathmandu. Vishwaroop at Pashupati constructed by Jung Bahadur Rana in 1874 is a dome-styled temple.

Shikhara temples are often of brick construction and consist of square-cell with tapering tower, symbolizing caves and mountains. Temples were usually set on stepped platform, followed by moulded courses. This was done to protect the temple from damp and to make it appear more respectable. The cella and the tower end in a flattened ribbed disc known as the Amalaka. The Amalaka is often transcended by a Gajur. The Nepali Shikhara temples have been found to have a wooden frame of posts and beams enclosed within the walls to give it added structural strength and resilience.

Towards the end of the Malla period, the Shikhara shrines adopted different outlines, that of the shape of an inverted flower bud, which became popular due to their ease of construction.