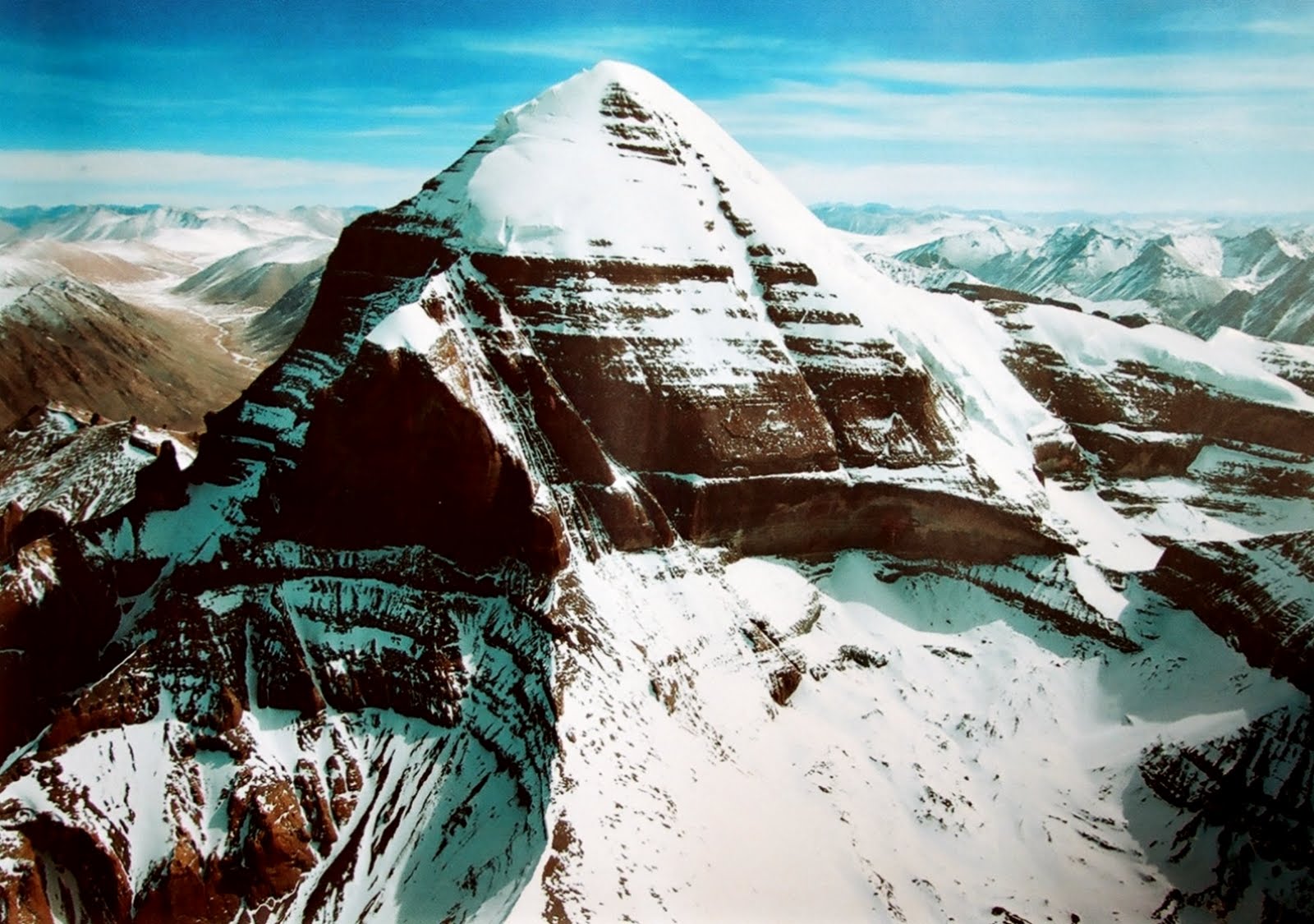 Mt Kailash（冈仁波齐峰）is a peak in the Kailash Range (Gangdisê Mountains), which forms part of the Transhimalaya in Tibet. It lies near the source of some of the longest rivers in Asia: the Indus River, the Brahmaputra River, and the Karnali River. It is considered a sacred place in four religions: Bön, Buddhism, Hinduism and Jainism. The mountain lies near Lake Manasarovar and Lake Rakshastal in Tibet Autonomous Region, China.

Every year, thousands make a pilgrimage to Kailash, following a tradition going back thousands of years. Pilgrims of several religions believe that circumambulating Mount Kailash on foot is a holy ritual that will bring good fortune. The peregrination is made in a clockwise direction by Hindus and Buddhists. Followers of the Jain and Bönpo religions circumambulate the mountain in a counterclockwise direction. The path around Mount Kailash is 52 km (32 mi) long.

Some pilgrims believe that the entire walk around Kailash should be made in a single day, which is not considered an easy task. A person in good shape walking fast would take perhaps 15 hours to complete the 52 km trek. Some of the devout do accomplish this feat, little daunted by the uneven terrain, altitude sickness and harsh conditions faced in the process. Indeed, other pilgrims venture a much more demanding regimen, performing body-length prostrations over the entire length of the circumambulation: The pilgrim bends down, kneels, prostrates full-length, makes a mark with his fingers, rises to his knees, prays, and then crawls forward on hands and knees to the mark made by his/her fingers before repeating the process. It requires at least four weeks of physical endurance to perform the circumambulation while following this regimen. The mountain is located in a particularly remote and inhospitable area of the Tibetan Himalayas. A few modern amenities, such as benches, resting places and refreshment kiosks, exist to aid the pilgrims in their devotions. According to all religions that revere the mountain, setting foot on its slopes is a dire sin. It is claimed that many people who ventured to defy the taboo have died in the process[citation needed]. It is a popular belief that the stairways on Mount Kailash lead to heaven.

Following the political and border disturbances across the Chinese-Indian boundary, pilgrimage to the legendary abode of Lord Shiva was stopped from 1954 to 1978. Thereafter, a limited number of Indian pilgrims have been allowed to visit the place, under the supervision of the Chinese and Indian governments either by a lengthy and hazardous trek over the Himalayan terrain, travel by land from Kathmandu or from Lhasa where flights from Kathmandu are available to Lhasa and thereafter travel over the great Tibetan plateau by car. The journey takes four night stops, finally arriving at Darchen at elevation of 4,600 m, small outpost that swells with pilgrims at certain times of year. Despite its minimal infrastructure, modest guest houses are available for foreign pilgrims, whereas Tibetan pilgrims generally sleep in their own tents. A small regional medical center serving far-western Tibet and funded by the Swiss Ngari Korsum Foundation was built here in 1997.

Walking around the holy mountain—a part of its official park—has to be done on foot, pony or yak, taking some three days of trekking starting from a height of around 4,600 m past the Tarboche (flagpole) to cross the Drölma pass 5,500 m, and encamping for two nights en route. First, near the meadow of Dirapuk gompa, some 2 to 3 km before the pass and second, after crossing the pass and going downhill as far as possible (viewing Gauri Kund in the distance). 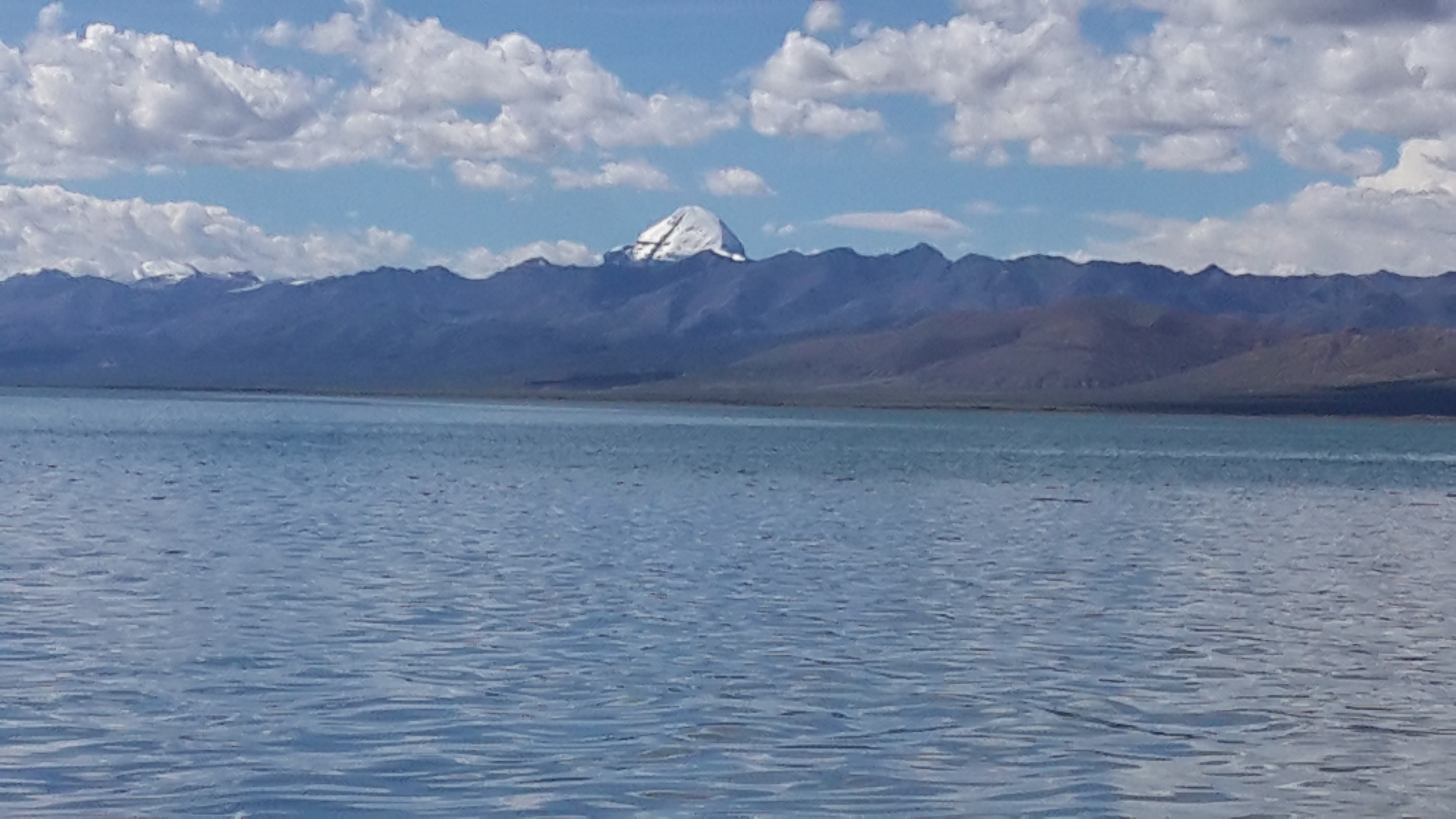 Located in the east of Purang County, Ngari Prefecture, Tibet Autonomous Region, China, Lake Manasarovar is regarded as the “Holy Land for the Center of the World” by the pious Buddhists because of the charming scenery. Besides this reputation, Lake Manasarovar is also boasted as “the Second Largest Fresh Water and the Most Transparent Lake in China” and “One of the Three Holy Lakes in Tibet”. As the birthplace of four great Asian rivers, Lake Manasarovar attracts thousands of travelers in the world.

In the Tibetan language, “Manasarovar” means “invincible clear lake”. It is said that Lake Manasarovar is the holiest lake which is bestowed by the God. The sacred water of the lake can clean one’s sins or annoyances when he is rinsed by the river. As the oldest and holiest lake for Bon religion, Indian Buddhism, and Hinduism, Lake Manasarovar is one of the most beautiful lakes on the planet. According to the Hindus, it is the residence for the Shiva God.

Lake Manasarovar is the most transparent fresh lake in China. It is dotted between the Mt. Kailash and the Gurla Mandhata. In the past, Lake Manasarovar was connected with the Ghost Lake – Lake Rakshastal. After many years later, it was developed to the internal lake and isolated by the glaciers and sands. The shape of the lake like a pear with the length of 26 kilometers and the width of 21 kilometers. The lake is at the altitude of 4588 meters. The average depth of it is about 46 meters, and the maximum depth is 81.8 meters. The total square of Lake Manasarovar is about 412 square kilometers. Standing by the bank of the river, you can see fourteen meters deep of the clean lake. There are many micronutrients in the lake such as B, Li, F, and so on. The main supplies of the lake are the melting glacier and the rainfalls.

Every summer, Buddhist believers walk to this holy place and do pray. They rinse with the holy water for the purpose of seeking blessings by the God. There are eight temples scattering all around the lake.

Next to the Lake Manasarovar, there is a saltwater lake called Lake Rakshastal which means poisonous black lake in the Tibetan language.

The best way to show the believers’ sincerity is to kora around the lake. It always takes them four or five days to kora. For travelers, you can sit along the bank of the lake quietly and enjoy the attractive views around you. Having a sunbath and seeing the snow-capped mountains in a far distance, what a wonderful journey!

When you travel to the holy Lake Manasarovar, you’d better lower your expectation of the accommodation. Because you are in a remote Tibetan area which is far away from the city. Only guesthouses are available to you. You’d better bring some dry food and some instant food because it is hard to find a store in this area.