Jul 8, 2018-Nepal Tourism Board (NTB) has started promoting Nepal aggressively in the key Indian cities as travelers from the southern neighbour is expected to boom in religious, leisure and adventure segment.

The country’s tourism promotional body and Society of Travel and Tours Operators Nepal jointly organized Nepal Sales Mission in Ahmedabad, Surat and Pune on July 2, 4 and 6 aiming to attract visitors from west India.

Around 210 Indian tour operators interacted with 13 Nepali counterparts on the business deals and packages, the board said.

Leisure, pilgrimage, casinos, shopping and adventure were the highlights during the destination presentation made by the NTB.

Emphasizing Nepal as a tourism hub of South Asia, Manager at NTB Bimal Kadel said it is a pioneer in adventure tourism and gateway to the Himalayas, including Kailash Mansarovar and highlighted the experience and brand value of the country.

On Friday, India agreed to Nepal’s proposal of allowing leave travel concession (LTC) to its employees to visit Nepal. The decision was reached during the second meeting of the Joint Working Group Meeting (JWG) on Tourism Cooperation between Nepal and India held in Kathmandu.

India has taken Nepal’s proposal positively, assuring that the respective ministries would initiate the process, the Tourism Ministry said in a statement. The LTC allows grant of leave and ticket reimbursement for eligible Indian government employees. 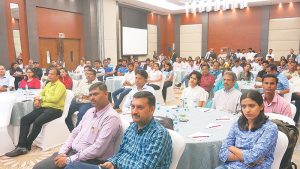 Civil Aviation Ministry had given its nod in 2015 to a proposal to provide leave travel concession for government employees to Nepal, Bhutan, Maldives and Sri Lanka to boost tourism in the region, it has not been effective.

There are about 4.92 million central government employees in India. Even as arrivals from India, the country’s top tourist source market, jumped 36 percent to 160,832 individuals, it is still a small fraction given the proximity and Nepal’s tourism allure, according to Tourism Ministry officials.

The highest ever arrivals from India were recorded in 2013 when the country received 180,974 individuals. Currently, more than a dozen daily flights are in operation between Kathmandu and different cities in India. Visitors traveling overland are not taken into account in the arrival figures.