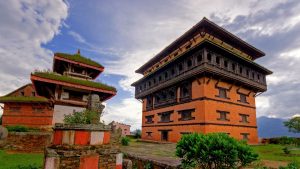 Take out a day or two to drive to Nuwakot from Kathmandu and visit the delightful Nuwakot Durbar perched in the mid hills of central Nepal. You could also spend a night in the Trishuli Bazaar and opt for a day hike to the Durbar.

At an elevation of 900 m, the ancient citadel stands proud as if untouched by changing times, amid the quaint Nuwakot Bazaar. While the indoors of the Durbar suffered some damage during the recent earthquake on April 25, 2015, the buildings are still intact and a tour of the premises is still possible. Reconstruction efforts are underway to conserve the heritage site that played a pivotal role in shaping the history of modern Nepal.

The Durbar, which literally means royal palace is still an undiscovered treasure, despite its historical and cultural significance. The seven-story pal­ace fortress was built during the reign of Prithvi Narayan Shah in the 18th century stands little marred by time despite a history of attacks by Malla and later Chinese forces.

Nuwakot is an interesting side trip from Trisuli Ba­zaar, reachable in an hour’s climb from the road.   Trisuli Bazaar can be reached in 3-4 hours on a regular bus service from Kathmandu. The Nuwakot Bazaar, a small town, that surrounds caters to the small market it gets. Modest food and accommodation services are offered in the Bazaar. A luxury farm house nearby is  ready to serve those seeking more.