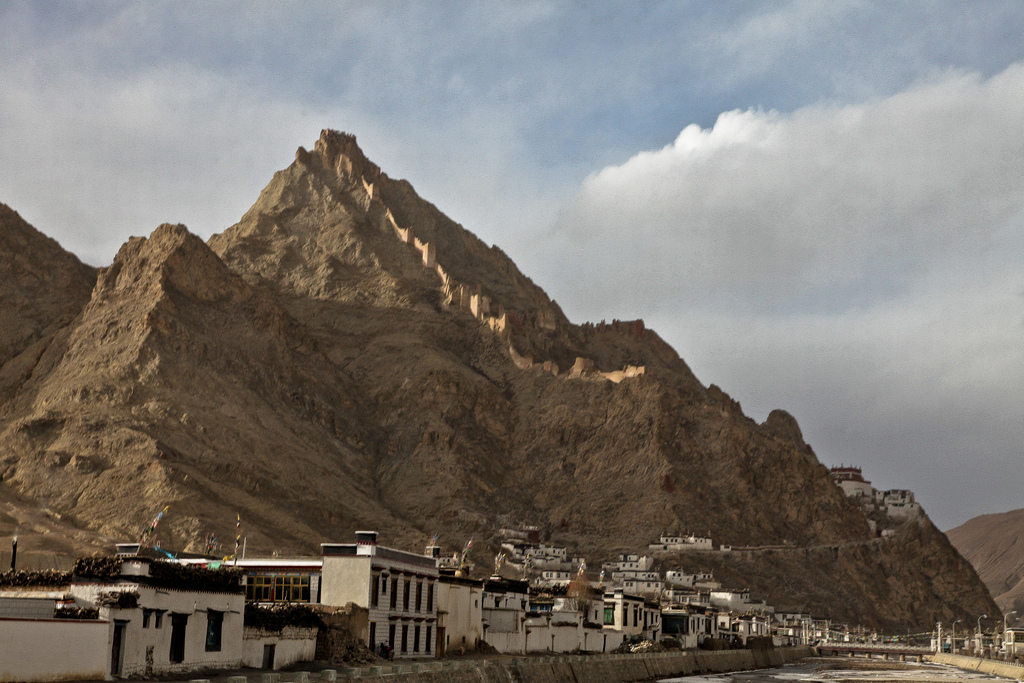 The town lies 7 km off the Friendship Highway between Lhatse and Tingri, at the southern foot of 5,260 m high Gyatso La.

Shelkar is famous for the Shelkar Chode Monastery, founded in 1266 by a Kagyu lama, but it has been a Gelugpa monastery since the 17th century, and formerly had some 400 monks. Although, destroyed by the Red Guards during the Cultural Revolution, the assembly hall has been rebuilt, and there is an active branch monastery in Boudhanath, Nepal.

The ruins of the old dzong are located on the hill behind the monastery.
Gateway to Everest

The early British expeditions to Mount Everest in 1921, 1922 and 1924 all stopped at Shelkar Dzong on their way from Darjeeling to the northern side of Everest.

The village of Tingri (དིང་རི་; 定日; Dìngrì or Tingri Gankar) comprises a gritty kilometre-long strip of restaurants, guesthouses, loose cattle and truck-repair workshops lining the Friendship Hwy. Generally called Old Tingri, it overlooks a sweeping plain bordered by towering Himalayan peaks (including Everest) and is a common overnight stop for tours heading to or from western Tibet or Nepal, as well as climbing groups coming and going from the nearby peaks. On clear days there are stunning views of Cho Oyu from Tingri. Pretty much a one-street town, Hwy 318 juts through town, where you’ll find all of the hotels and restaurants.

Zhangmu Town borders Nepal to the south. Sino-Nepal Friendship Bridge is only 10 km away and another 100 km’s drive will lead you into Kathmandu, the capital of Nepal. Different from other dry and cold areas in Tibet, Zhangmu is mild and humid because of its subtropical climate. As a port, Zhangmu is always crowded with various skin-colored tourists and businessmen.

A free trade market formed near the Friendship Bridge spontaneously 8 years ago, which is now still developing. According to an agreement between Chinese and Nepalese governments, people living near the border may cross the border freely within 30km (18 miles) from the border. Every day, hundreds of Chinese and Nepalese merchants are doing their business in Zhangmu Town. The local Sherpas lease their houses to those merchants, sharing profits from the border trade.

Leaving Shelkar of Tingri county, marching towards the southwest along China-Nepal Friendship Highway, via Tingri Town (where the county site, commonly known as the old Tingri) going more than 30 km to enter the territory of Nyalam county. On the way people can see Mt. Everest from another angle. Zhangmu has mild climate, low altitude, beautiful scenery the four seasons of flowers are in full bloom, together with the special geographical position, it has a lot of potential development of tourism. China-Nepal Friendship Highway was open to traffic since 1965 (part of the 318 National Road), bilateral economic ties between the two countries are becoming more and more frequent, business travel and goods have been increasing. Here has become the main channel of China that many foreign tourist groups and mountaineering expedition come in and out. Zhangmu port 13 km from the China-Nepal border Friendship Bridge, pass through the Friendship Bridge and enter the territory of Nepal, less than 90 kilometers to the south can be arrived in the capital, Kathmandu Nepal. Now the Qinghai-Tibet railway branch line will soon connects from Lhasa in here.

In the Zhangmu Town there is Zhangmu hotel, also there are some ethnic characteristics of the family hotel opened by local residents, loved by Chinese and foreign tourists.

Zhangmu Town, 2300 meters above sea level, is a typical mountain city built along the winding mountain road, modern buildings and ancient log cabin crisscross, the scenery is pleasant. Han, Tibetan and Nepal live together. From Nyalam County to Zhangmu Ttown is 30 km, 1 hour driving, along the road is steep and bumpy with towering tree. It is interesting that waterfall hanging down from fog, the vehicle is passing through under the waterfall, which will give you a life-enchanting trip. Along the way and go down the street to the end is the Chinese customs, a few miles away is the China-Nepal border Friendship Bridge.

During the tourist season, Zhangmu Town has long distance buses to Lhasa, Shigatse, which takes about 18 hours. Its departure time is fixed, every week there are about two to three buses. At the same time, many tourists are charter car or thumb a lift. Also there are buses send some foreign visitors out of the town, some will be returning empty, so hitchhiking is comparatively easy.