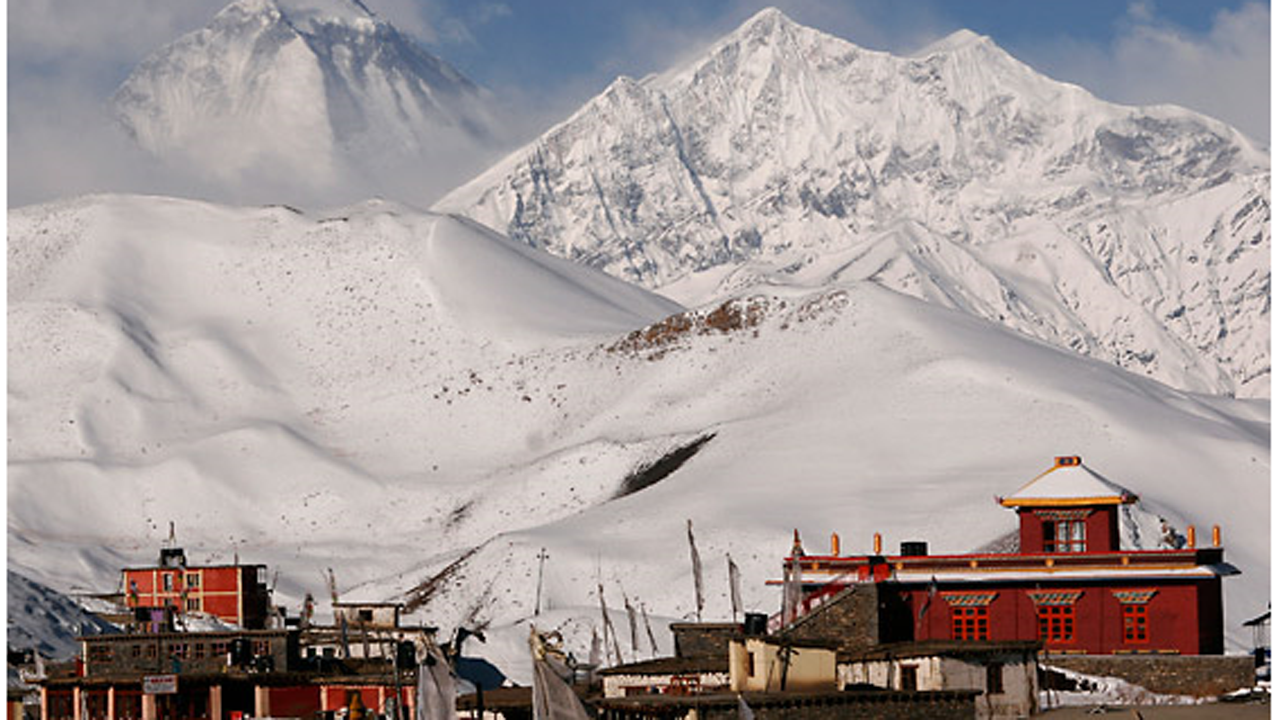 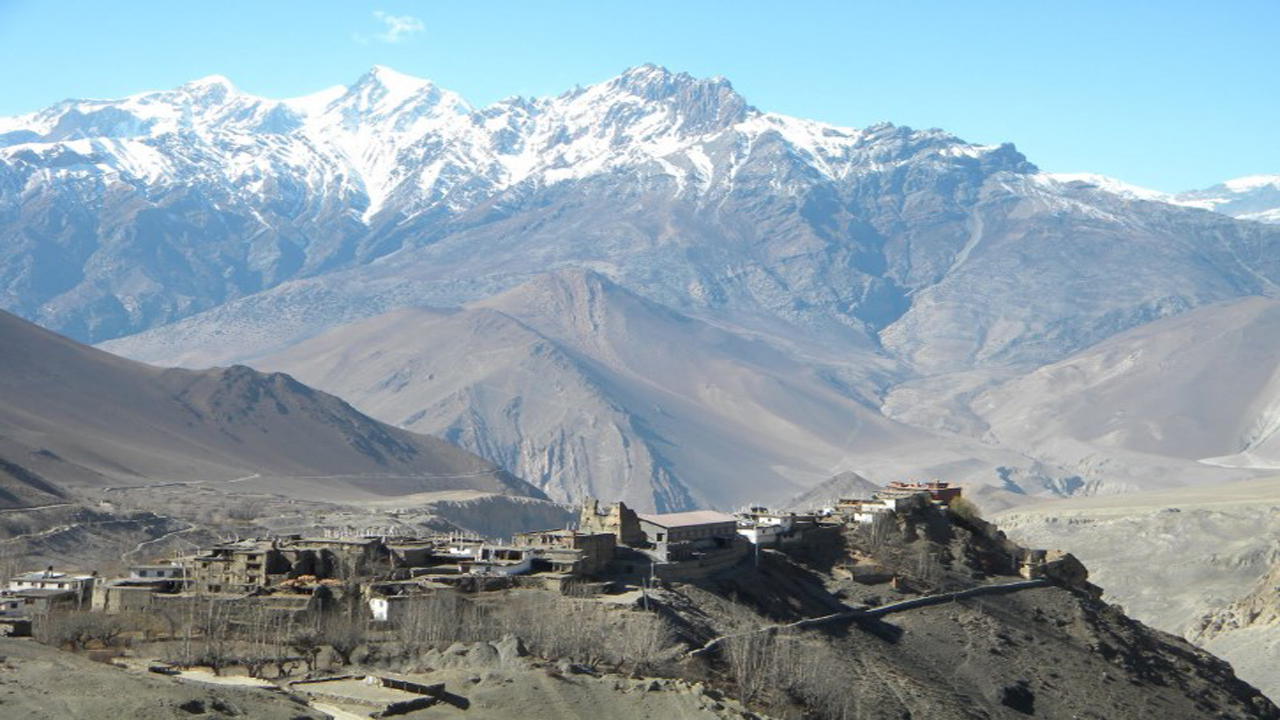 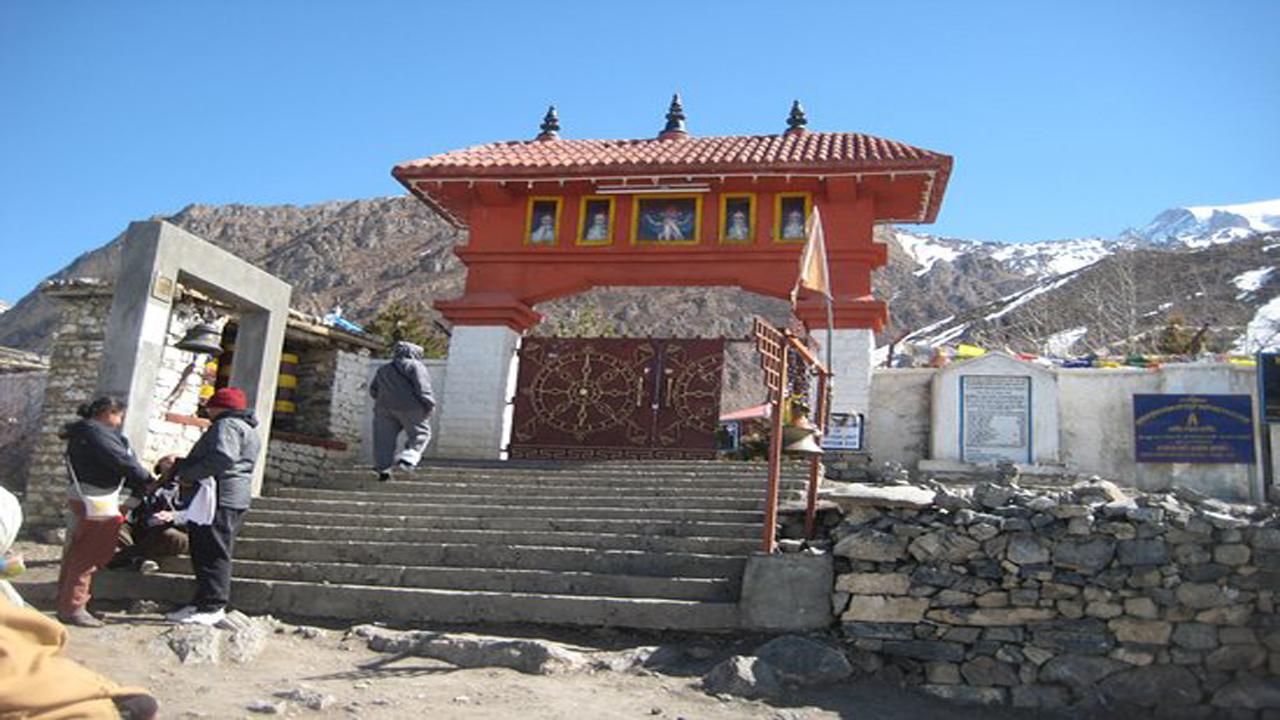 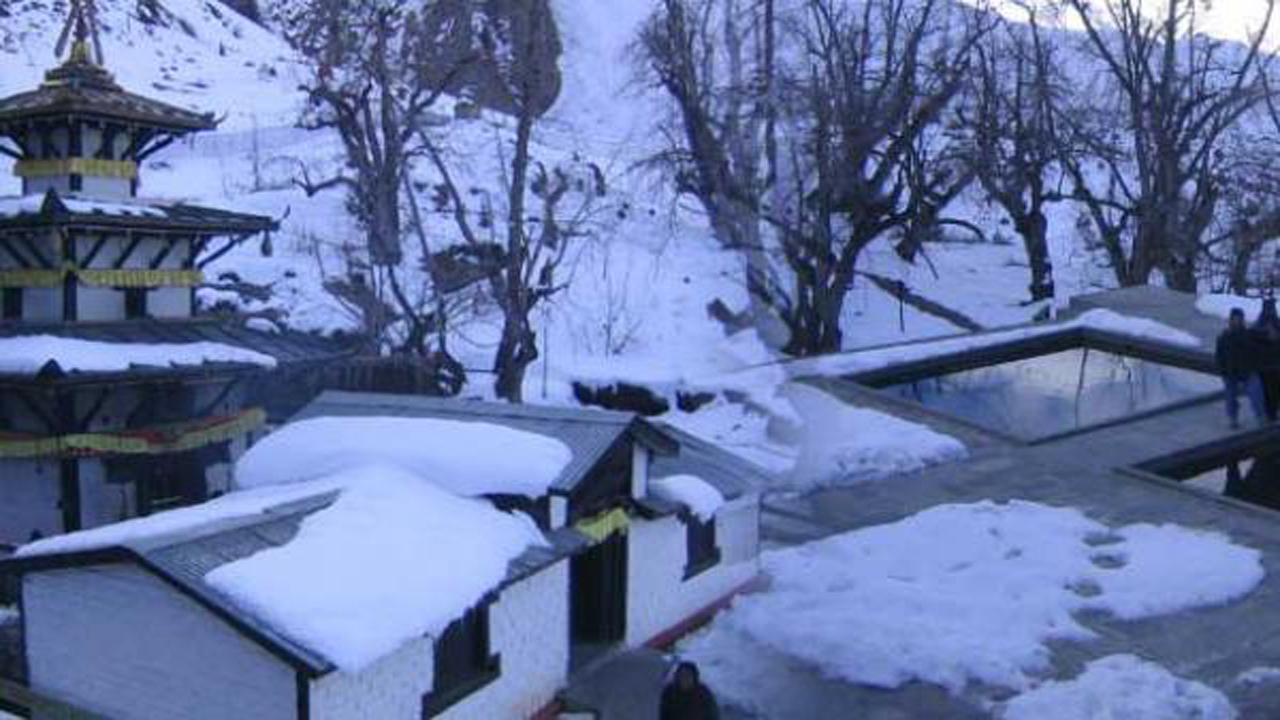 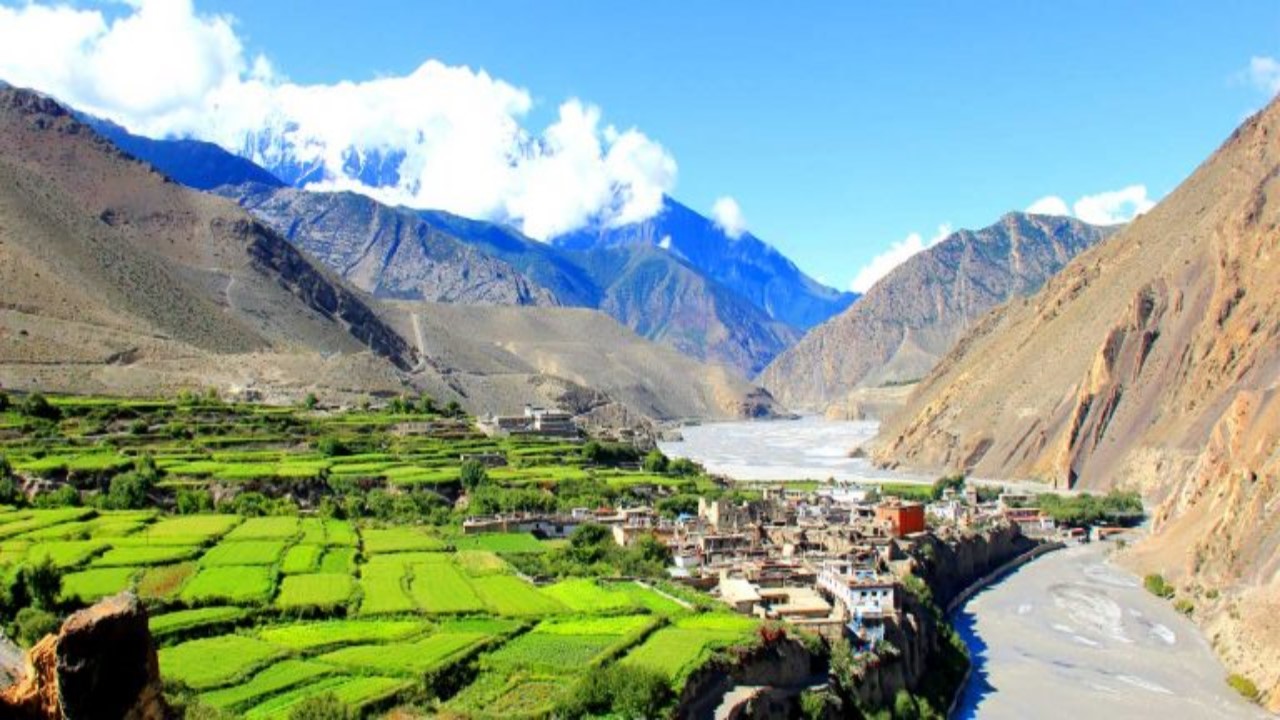 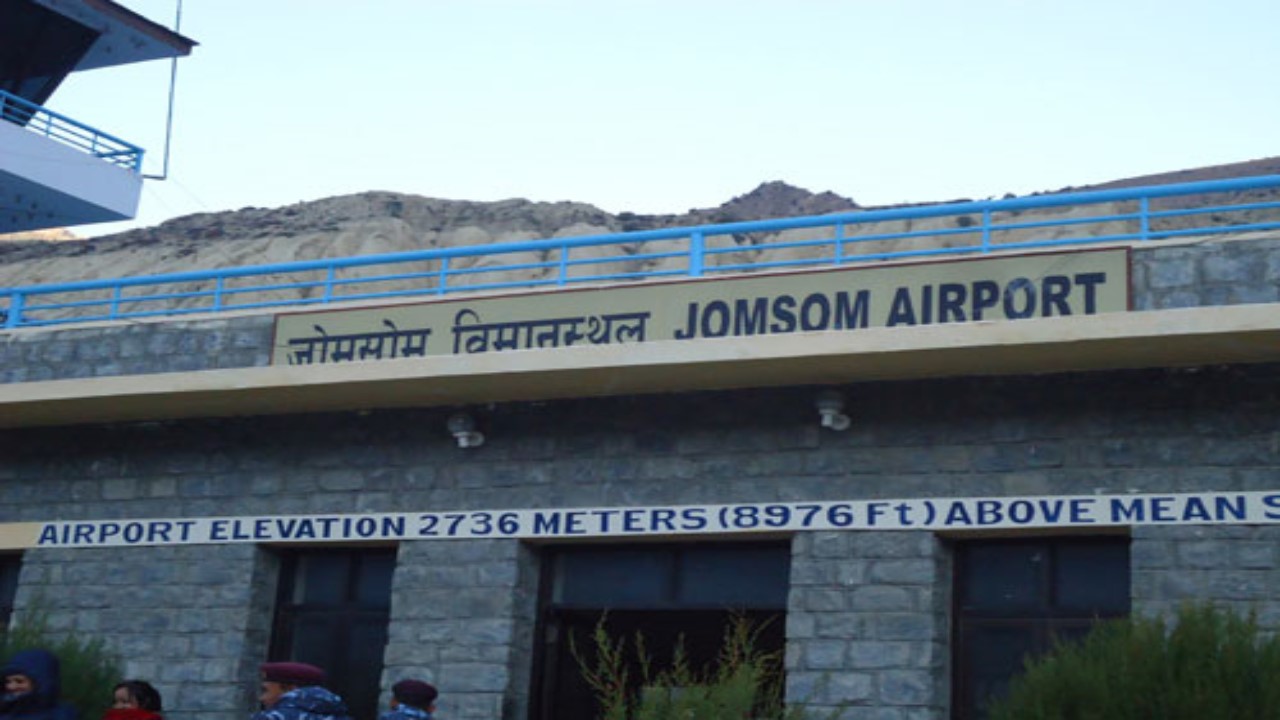 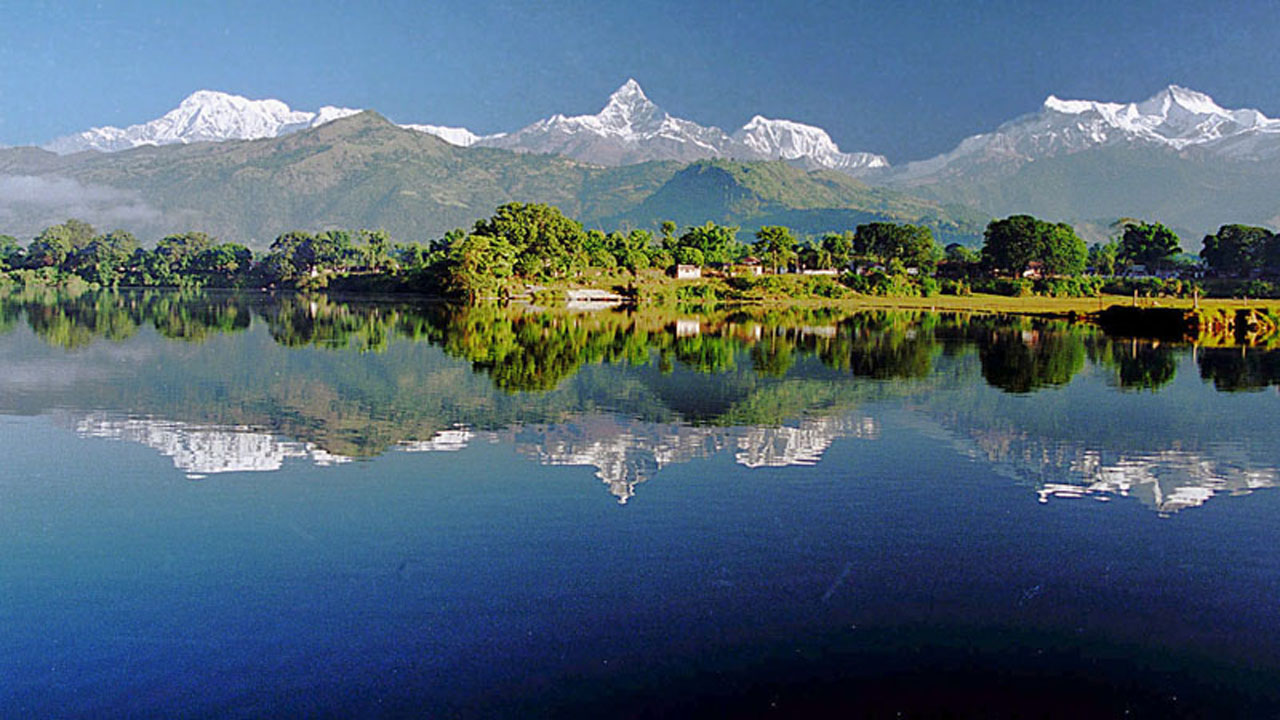 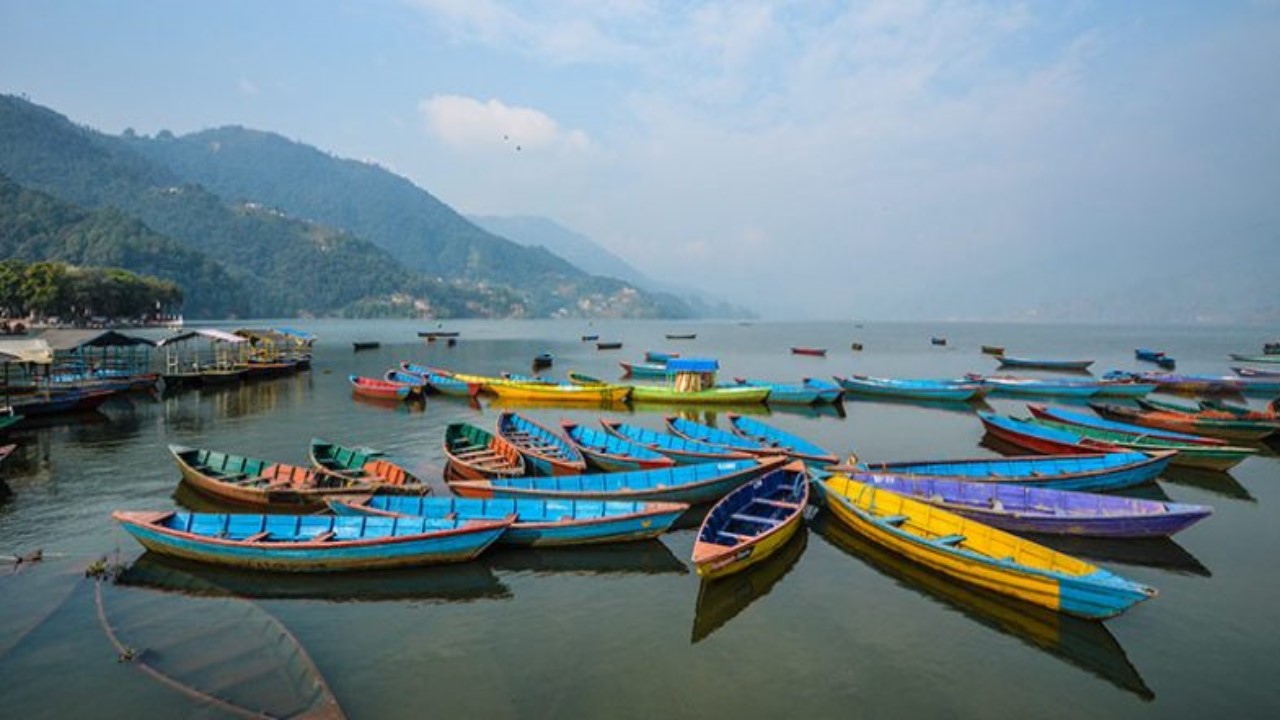 Muktinath
(GOD OF MOKCHHYA)
It is believed that all miseries and sorrows are relieved once you visit this temple (Mukti = Nirvana, Nath = God). The famous temple of Lord Muktinath is a sacred place for both Hindus and Buddhists lies in the district of Mustang and is situated about 18 km northeast of Jomsom at an altitude of about 3,749 mt. (12184 ft.) The main shrine is a pagoda shaped temple dedicated to Lord Vishnu. Set into the wall around it, are 108 water spouts from which pour holy water. The jwala Mai (goddess of flame) temple nearby contains a spring and an eternal flame fed by natural gas underground. About 16 miles from Muktinath is the Damodara Kundam, the source of Kali Gandaki river. One can find Saligrama stones on the bank of this river. There are accommodation facilities available in Jomsom and Muktinath from where one can enjoy remarkable natural beauty.

Muktinath is a sacred place both for Hindus and Buddhists located in Muktinath Valley at an altitude of 3,710 meters at the foot of the Thorong La pass, Mustang district, Nepal.
The Hindus call the sacred place Mukti Kshetra, which literally means the “place of salvation”.  Mainly the temple is with a predominant Sri Vaishnava origin and worshipped by Buddhists. This temple is considered to be the 105th among the available 108 Divya Desam. The ancient name of this place, before Buddhist origin is known as Thiru Saligramam. This houses the Saligrama sila considered to be the naturally available form of Sriman Narayana – the Hindu God HEAD. It is also one of the 51 Sakthi peetams.

The central shrine of Sri Muktinath, predominant among all 108 Hindu SriVaishnava Divyadesam is considered one of the eight most sacred shrines for Hindu Vaishnavas known as Svayam Vyakta Ksetras, the other seven being Srirangam, Srimushnam, Tirupati, Naimisharanya, Totadri, Pushkar and Badrinath. The temple is very small. Muktinath is one of the most ancient Hindu temples of God Vishnu. The murti is of gold and is tall enough to compare with a man. The prakaram(outer courtyard) has 108 bull faces through which water is poured. It is of freezing temperature. The sacred water that flows in 108 pipes around the temple complex denote all sacred Pushkarini waters (Temple Tanks) from all 108 Sri Vaishnava Divya Desams including Srirangam, Tirumala, Vaikunta, where the devotees take their sacred bath even in the freezing temperatures.

In Hindu astrology, there are 12 zodiac or Rashi and 9 planets or Graha, giving a total of 108 combinations. Also there are 27 Lunar mansions or Nakshatras which are divided in 4 quarters or Padas each giving a combination of 108 Padas in total. The worship is conducted by Buddhist nuns.

The waterway downstream from Muktinath along Kali Gandaki is the source of all Silas or Shaligrams that are required to establish a temple of Vishnu anywhere in the world. It is considered to be one of the holiest places of pilgrimage of Hindus, Buddhists, and Vaishnavas.

*Muktinath Temple :*
The Pagoda style Muktinath Temple is symbol of the religious symbiosis between both Hindus and Buddhists. Hindu believes that lord Vishnu got salvation from curse of Brinda (wife of Jalandhar) here. Therefore he is worshipped as Muktinath (Lit. the lord of salvation). The holy shrine, which is said to have risen on its own, is one of eight such shrines (the others include Srirangam, Sri Mushnam, Tirupati, Naimisaranyam, Thottadri, Pushkaram and Badrinath). It is also one of 108 Vaishnava shrines. Here in the early 19th century the Hindus consecrated a Vishnu temple and named is Muktinath – Lord of Liberation. Against a backdrop of incredible starkness you can sit and stare to the south the snow covered Annapurna range, or to the north the Tibetan plateau.

*Kunda:*
In front of MuktinathTemple there are 2 Kunda (Water pond), Where holy dip is believed it can wash away negative karma, the results of one’s past negative actions.

*Mukti Dhara:*
Around the temple is a wall from the temple which there are 108 waterspouts (Dhara) name of “Muktidhara”. The 108 faucets in the cast in the shape of bulls’ heads, pour fourth-sacred water closely arranged in a semi-circle with a gap of hardly a foot between the faucets, at a height of seven feet. The water from Gandaki River continuously flowing through the mouth of the bull. Pilgrims who visit the temple take a holy bath in each of these spouts. But as the water is ice cold it requires burning desire and courage to take a holy bath here. Hindu devotees take bath under chilled water of 108 waterspouts “Muktidhara” believing that it brings them salvation. The holy flame alongside a spring that is the source of the religious importance of Muktinath. In Hindu astrology, there are 12 zodiac or Rashi and 9 planets or Graha, giving a total of 108 combinations. Also there are 27 Lunar mansions or Nakshatras which are divided in 4 quarters or Padas each giving a combination of 108 Padas in total.

*Swaminarayan:*
One Hindu Guru connected to Muktinath is Lord Shri Swaminarayan, Satguru of Sabij Yoga, the goal of which is the realization of and service to God Supreme. At the end of the 18th century this Satguru practiced severe penance in Muktinath for two and a half months and attained the highest degree of proficiency in Nishkamvrat. In 2003 his followers funded the new wall around Muktinath and raised a small monument for him at Muktinath.

*Shaligram:*
Another attraction for the pilgrimage is the River kali Gandaki from where one can collect fossils of the Jurassic park age. One may find a fossil within a few minutes or it may take hours and without success.

However, these fossils can be had from the local people at a price. Shaligram, a black stone fossil if found, is considered sacred and is kept in pooja (prayer) room in the house. It is supposed to be symbol of Lord Vishnu.

Day 01: Drive from Pokhara to Kagbeni
Day 02: Drive from Kagbeni to Muktinath 3800M (1)hours drive back to Pokhara(8hr)

Days are relatively warm; especially when there is no wind in the late morning. The appropriate clothing as per the travel period (temperature) and a good walking shoes for rocky and uneven paths are highly recommended. Walking stick would help for those who need support. We suggest you to take normal warm clothes. Light warm jacket, woolen sweater, warm T-Shirts, comfortable shoes, trousers and cotton pants are enough for this trip. We recommended you to bring down jacket for the winter.